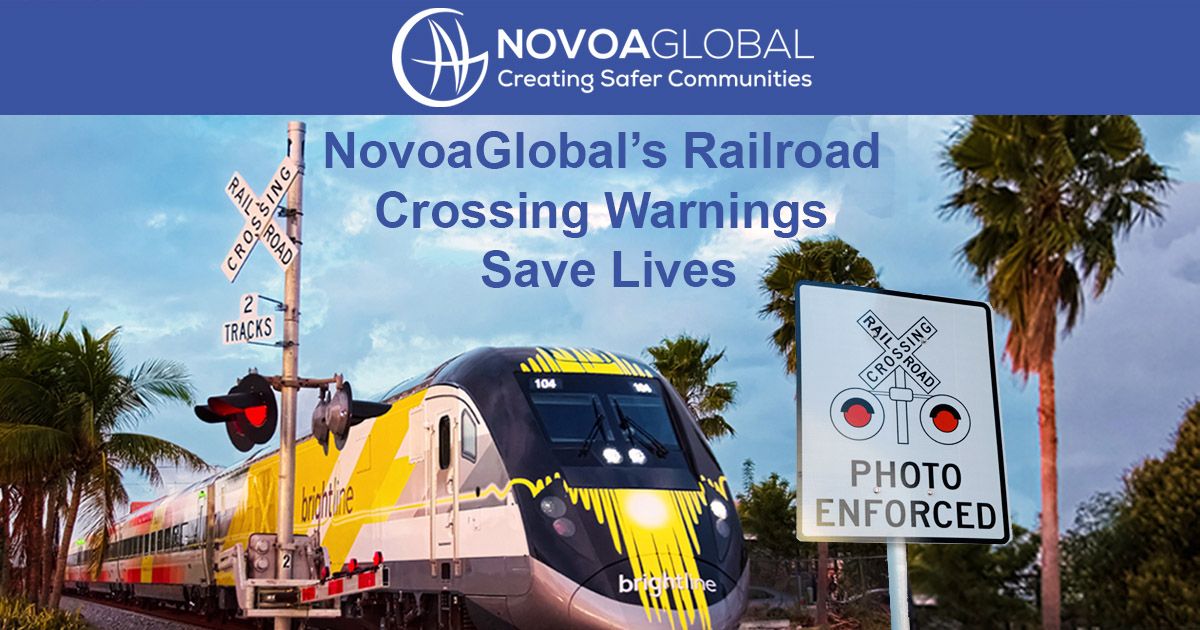 NovoaGlobal is working with Brightline to educate drivers and create a safer community by saving lives and decreasing accidents. The Railroad-Safe™ solution reminds drivers to yield or stop at railroad crossings and be alert for the approach of light rail transit. Brightline, a privately run high-speed, inter-city rail route between Miami and West Palm Beach, Florida relaunched its service November 8, 2021.

The contracted program for the railroad photo enforcement warning system detects and records the vehicles, including tag numbers, that disregard the railroad warning signals and flashing beacons, and continue to drive through the crossing gates while the crossing arm is lowering and trains are approaching.

Railroad-Safe™ warns drivers about state and federal statutes, such as stopping 15 ft. from rail crossings, not proceeding through the crossing gate, nor entering the crossing without space to clear, as well as mandatory stopping for buses and trucks. With Railroad-Safe™, all motorists learn to exercise caution around the tracks.

As a Vision Zero traffic safety solution, Railroad-Safe™ prevents rail-related fatalities by warning and educating drivers. Operated at railroad crossings, the traffic safety system is used to reduce the number of traffic violations and therefore decrease the risk of vehicle accidents, collect information, and educate the public. NovoaGlobal’s photo enforcement-based driver education program is shown to be successful in reducing the number of railroad crossing violations. According to the Federal Railroad Administration (FRA), the majority of railroad crossing collisions can be prevented.

“We are honored Brightline recognizes the importance of providing life-saving railroad photo enforcement warning solution to improve citizen safety. We look forward to supplying our cutting-edge technology and services to Brightline to enhance the successful implementation of Brightline’s new high-speed rail system,” said Carlos Lofstedt, President and CEO of NovoaGlobal.

Whether it’s a freight or commuter train, or light or passenger rail, given their size, weight, and mass, trains need a long time to stop, even after emergency brakes are applied. Ignoring warning devices or traffic signals, or attempting to go around a lowered crossing gate arm, can have deadly consequences for drivers, anyone in the motor vehicle, those operating or traveling on a train or even those living and working near rail lines. Many crashes are caused by risky driving behaviors and poor decision-making, which means the incidents and deaths could have been prevented.

Under perfect conditions, the average passenger car traveling at 55 miles per hour can make an emergency stop in about 200 feet, whereas a light rail train requires about 600 feet—the length of two football fields—to stop. An average-length freight train traveling at 55 miles per hour may take the length of 18 football fields to stop. Due to optical effects, most people misjudge an approaching train’s speed and distance from the crossing. It’s like trying to guess the height or speed of an airplane in the sky.

By law, freight and commuter trains always have the right-of-way at rail crossings.

Approximately 60% of collisions at railroad crossings occur where active warning devices are present. When approaching a highway-rail grade crossing, slow down, look and listen for a train on the tracks, especially at “passive” crossings. At night, and even during the day, look carefully in both directions before crossing a track.

Even if you travel the same route every day, it’s a very bad idea to rely on past experiences to guess when a train is coming. Freight trains don’t always travel on the same schedule and passenger rail train schedules can change. Also, many people don’t realize that trains can approach from either direction at any time, especially in locations with multiple tracks. Before driving over a rail crossing, be certain there is enough room on the other side of the tracks for your vehicle to fully clear the crossing. Be aware that you may need to cross multiple sets of tracks at some rail crossings.

Never stop on the tracks. Keep moving once you have entered the crossing and, to avoid stalling, never shift gears on the tracks. If your vehicle does stall on a rail grade track—even if you don’t see a train coming—quickly move all occupants out and away from your vehicle and the track. Run toward the train and away from the tracks. If you run in the same direction that the train is traveling, you could be hit by flying debris when the train hits your car. When it’s safe to do so, call the number on the blue Emergency Notification System sign. If the sign is not visible to you, dial 911 for help.

Interested in finding out more about Railroad Photo Enforcement? Contact Us: 888-666-4218, Ext. 6 for East Coast and Ext. 7 for West Coast.  We can also be reached at [email protected]