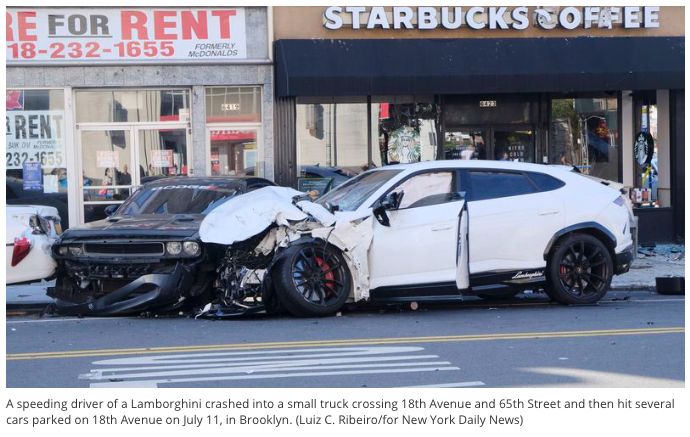 Car traffic plummeted in New York when it became the epicenter of the coronavirus outbreak. Fatal car crashes did not.

Data from the traffic analytics company INRIX found the number of miles traveled by vehicles in the five boroughs fell 76% in late March and early April, and has since bounced back to roughly 29% of pre-pandemic levels.

NYPD data, however, shows 103 people were killed by cars from January through July 15, down just 9% from the 113 victims of fatal crashes during the same period of 2019.

Pedestrian and cyclist deaths have also fallen since last year, from 74 to 50. The number of motocylist and vehicle passenger deaths, however, has skyrocketed, from 39 to at least 52, city Department of Transportation data shows.

DOT Commissioner Polly Trottenberg said the empty streets have given way to speeding and dangerous drivers — on whom she blamed the grim death totals. She said the city’s network of speed cameras this year has issued roughly one and a half times the number of tickets than expected.

“We have seen an uptick in serial speeders,” said Trottenberg. “There’s just a lot more of them around the city, so we’re seeing some repeat offenders. With traffic volume so much lower, people just unfortunately find themselves speeding.”

Trottenberg said her team’s observations are contrary to traffic management theory, which says traffic deaths directly correlate with the number of cars on the road. Instead, data shows a relatively small number of drivers is causing big concerns for street safety.

“It is just one strange effect of congestion: It does slow vehicles down,” Trottenberg said.

Car crashes in New York City this year have proved to be as much a threat to public safety as a spike in gun violence this year. NYPD data shows as of last week, at least 115 people in the city had been killed by guns in 2020, up from 69 during the same stretch of 2019.

Street safety advocates have called for Mayor de Blasio to scale up efforts to make streets safer for pedestrians and cyclists. Since April, cars have been banned on a patchwork of streets, but many advocates feel it’s not enough.

Bike New York last week sent a letter to the NYPD proposing ways to crack down on reckless drivers, but alleged more traffic stops would lead to more racial profiling. Instead, the group wants the NYPD to accept videos submitted by citizens as evidence of reckless driving.