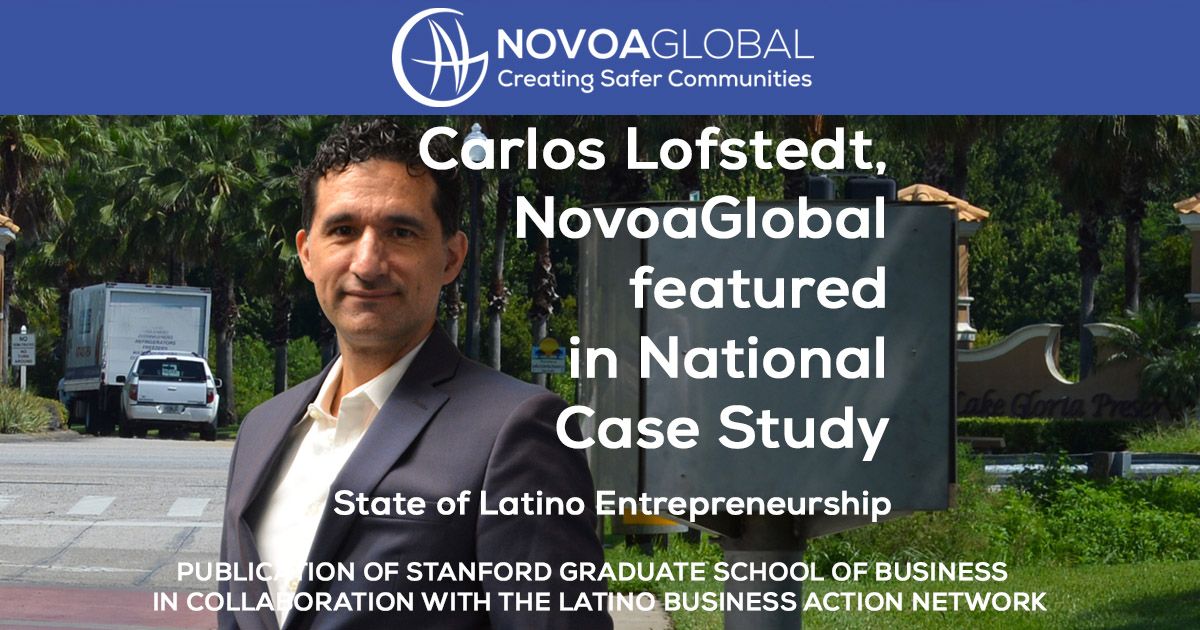 NovoaGlobal’s CEO Carlos Lofstedt was selected as one of the Case Studies in the State of Latino Entrepreneurship 2021 Report.

The report is a national publication of the Stanford Graduate School of Business in collaboration with the Latino Business Action Network.

This is the seventh annual State of Latino Entrepreneurship report in which they have collected robust survey data from Latino-owned businesses across the country to provide a timely account of the fastest growing segment of the U.S. business population. This year, they administered the largest survey to date of 15,000 business owners — 7,500 Latino-owned employer businesses and 7,500 non-Latino, White-owned employer businesses as a benchmark comparison group.

For a copy of the complete report: Report 2021 State of Latino Entrepreneurship.

(Excerpt from the 2021 State of Latino Entrepreneurship report)

“I’m optimistic we will keep growing in the future.”

Carlos Lofstedt is no stranger to the highs and lows of the entrepreneurial landscape. From a very young age, he understood the importance of hard work and independence, values that were instilled in him by his Chilean father. Since 2010, Lofstedt has owned and operated NovoaGlobal, a developer and manufacturer of advanced traffic management, photo enforcement, and intelligence solutions designed to improve safety.

Lofstedt has been working in traffic safety for most of his life. Upon graduating from Linkoping University in Sweden with a degree in Industrial Engineering and Management, he was part of the inception of Vision Zero in Sweden. Vision Zero is a multinational road safety project that requires liaising across many different groups, like policy- and auto-makers, many of whom hold competing interests. But eventually Vision Zero found success. “People thought it was unrealistic to get zero deaths on the roads, but Sweden got that lead and the people stopped laughing. Vision Zero has so far been adopted in 40 communities across the U.S., including D.C. and Orlando, which are both our customers today.”

Lofstedt eventually decided to take his expertise to the United States, where he could apply his knowledge to the country’s countless traffic problems. The transition was not easy. Because Lofstedt did not have a credit history in the United States, funding was nearly impossible to come by, so he initially funded NovoaGlobal out of his own pocket. Today, the company has about 25 employees and contracts across numerous locations including Washington, D.C., Tacoma, and Orlando. “Today we’re at a level where we don’t really need financing. We’re self-sufficient at our current scale.”

Although they were not immune to the adverse effects of the pandemic, in some ways NovoaGlobal was uniquely situated to navigate it. “We have the luxury of having long-term contracts, so that’s a big advantage.” That said, NovoaGlobal’s deeply intertwined relationships with state and local governments also brought unique challenges. “Politics gets strange. You’re dealing with city councils and mayors who may or may not extend or renew contracts signed by their predecessors.” The company had several contracts fall through as a result of state budgets that were hit hard during the pandemic. Despite that, NovoaGlobal has kept growing.

At the height of the pandemic, Lofstedt joined the Stanford Latino Entrepreneurship Initiative Education Scaling Program where he expanded his network and connected with other CEOs around subjects such as scaling and lead management. During this time, the company also adopted new mechanisms for building more powerful email campaigns based on data and logic. It also adapted by developing a COVID-ready eHearing platform that enables cities to provide hearings to citizens without the need for in-person contact. This process is completely online, thus saving time for citizens and city personnel and eliminating the danger of spreading the virus through in-person contact.

For the future, Lofstedt is feeling optimistic. NovoaGlobal stays ahead of the competition by providing technology that integrates seamlessly and is not available from competitors. An additional benefit to customers is a License Plate Recognition system (LPR) that has the ability to incorporate an Amber Alert and/or Silver Alert program for immediate notification and response. At the same time, NovoaGlobal is able to integrate external systems into the platform, which NovoaGlobal piloted in Volusia County and in New York State. When thinking about what comes next, Lofstedt states, “I’m optimistic we’ll keep growing in the future.”